Benefits Of Steam Shower: Do They Work?

If you’re starting a new building or moving to a newly rented apartment, one of the fixtures your bathroom should have is a steam shower. Most homes in the 80’s lack this bathing device at the time of construction unless the household installed them after moving in. You might be asking why you would need this bathroom fixture. Well, that’s not a rhetorical question because there is an answer for you. The benefits of a steam shower are beyond the health benefits of relaxation, and that’s why they’ve gained popularity in modern-day bathroom installation. They might not be luxurious like the renowned steam or sauna room, but they still perform what they do. Steam shower comes portable, not bulky as such, small space mounting is involved and does not require complex installation, unlike sauna room. It is also less expensive to maintain a steam shower than the so-called mighty steam room occupying almost all the bathroom space, which means more cleaning work. Besides, a steam shower adds value to your home because it eliminates the cost of going to the spa. Also, it saves time of visiting the spa center, it’s convenient, and provides privacy. Nevertheless, to use a steam shower, you must integrate a steam shower generator, which is also applicable to the sauna or steam showering room. Some models come with an integrated heater that does the heating of water. 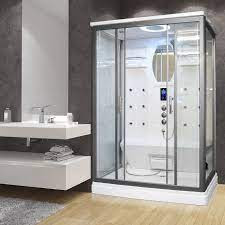 A steam shower is an enclosure that’s sealed to prevent moisture from leaving the steam shower. Before you can use your steam shower, firstly, it needs to be installed and after that is done. Step in your bathroom, turn on the shower control button. This action kicks the steam shower generator to start heating the water. However, the steam might not come instantly. Hence you need to heat for about some minutes (10 to 15 minutes) before bath time. Also, the shower has a channel called the steam head, where the steam comes out from, which you have to switch when you’re ready to shower.

What are the advantages of steam shower?

Many perks are attached to a steam shower. Aside from the plenty of health benefits, people tend to focus. It’s a form of modern showering for those living in colder regions. Also, it makes your bathroom attractive to households, visitors, and buyers. Amongst others, below are some reasons for homeowners not to overlook a steam shower:

Why Invest On Steam Showers?

Installing this spa shower in your house helps busy homeowners to have a convenient time to enjoy a spa shower and saves them money. Visiting a spa service is an expense, plus the cost of going is another extra money, making spa center to be inaccessible by a low-income earner. But steam showers are cheap to buy and install for everyday convenience use. For homeowners, who cannot afford a sauna/steam room due to the high purchase cost, or space it takes, a steam shower is the best alternative. It is small and cheap to acquire.

Steam showers are great for relaxation and for managing stress and depression. The numerous benefits of steam showers known among homeowners had made steam showers gain more awareness. If you’re yet to mount this bathroom fixture in your building, ensure you do ASAP!

Popular posts from this blog

September 28, 2020
Most people lose about 100 hair from the scalp daily. However, while most people grow their lost hair, others don’t. This could be due to heredity, age, poor nutrition, hormonal changes, and a lot more. Different medical treatments and procedures like hair transplant, medications, and laser therapy have been invented to take care of this. But unlike others, does laser hair growth work?  What is laser hair growth?  The laser hair growth or laser therapy is a clinically proven and non-invasive treatment used to stimulate the hair follicles to regrow lost hair. Also referred to as red light therapy, the procedure involves using low-level medical-grade laser light on the scalp. Like watering plants, the procedure supplies essential energy that the hair follicles need to grow.  The light irradiates protons into your tissue so that weaker cells can conveniently absorb them to make them stronger. As a result, the cells are nursed back to functionality, and by implication, capable o
Read more